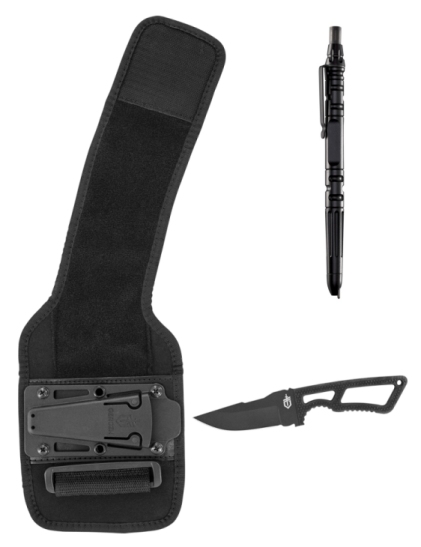 Gerber Gear knives and tools have been saving the day since the company was founded in 1939.  For decades they have been making tools for survivalists, soldiers, hunters and all outdoor enthusiasts.  In recent years they have aimed some products at the self defense market and this year they are doing it again with some great new products including knives, flashlights and a tactical pen.

The Gerber name is synonymous with knives so it stands to reason they would continue that tradition.  The Propel Downrange knife was created as a full-size tactical knife that can be carried discreetly.  It has a 3-way adjustable clip and slim G-10 handles so it will easily carry the way you want it.  The black oxide coated S30V tanto style blade is partially serrated so you know you will always be ready to cut the tough stuff.  The Propel Downrange comes in either assisted opening or auto models with black or tan handles to suit your needs.  The pommel has a lanyard hole in a steel tip which adds to this knife’s self defense capabilities.  This is a nice knife that feels good in your hand.

The next knife is born and bred for self defense.  The Gerber Ghostrike is a skeletonized fixed blade with a rubber overmolded handle.  It has several sheath options but my favorite comes in the Deluxe Kit.  The glass filled nylon sheath is mounted to a neoprene ankle strap and can be work with boots or shoes.  This is a great addition to balance out an ankle holster or as a stand-alone self defense tool.  The Ghostrike is made from 420HC steel and has a 3.3″ drop point blade.  It has a diamond textured grip so it is easy to hang on to even under stress with sweaty hands.  If you live where it is legal to carry a concealed fixed blade knife, this is the one for you.

The Pen is Mightier

The tactical pen craze has quieted down in recent years but that doesn’t mean it isn’t still a useful tool.  Gerber realized this and created the Impromptu Tactical Pen, one that is as useful as a pen as it is as a sword.  They started by recognizing if you want people to carry it, the pen needs to be usable.  So they made it small enough to comfortably carry in a shirt pocket.  Next, they made it a push button design.  Pens are much handier when they can be used one-handed.  Then they gave it a “Rite in the Rain” ballpoint pen cartridge that works in any condition.  Now that they had a design that would be useful in your everyday life, they made it ready for battle.  The body is made from machined steel and then covered with Cerakote.  It has a stainless steel clip that seem like it won’t bend and wear out like some others.  Finally, the best and most unique feature is the integrated tempered steel tip.  This beauty will shatter glass as well as wreak havoc on an attacker.  Gerber designed the Impromptu with input from street cops to give them an added tool when things go bad in a hurry, but this is a pen anyone could benefit from.

So called tactical flashlights have become so commonplace you can get them at your local big box store in three packs.  But there is more to making a tactical light than just a bright beam.  Gerber knows this and has been making lights for some time now.  In 2008 they began making lights capable of running on multiple battery sources.  They applied this technology to their new Cortex lights.  The full sized Cortex runs on either three CR123 lithium or 2 AA alkaline batteries.  It has high and low modes and will put out 675 lumens for 1.75 hours when using the lithium batteries or 390 lumens for 1 hour when using the alkaline batteries.

The Cortex Compact is a pocket sized light which puts out 175 lumens for 2 hours on one CR123 lithium battery or 150 lumens for 45 minutes on one AA alkaline battery.  Both lights have durable Cree LEDs with easy to operate tail cap switches.  The lights are made from black coated machined aluminum and knurled for a sure grip.  They feature serrated bezels for added striking effectiveness and pocket clips allowing them to be properly carried lens down.  These are two lights that work great together.  I like to have the compact in my pocket at all times and the full size Cortex close at hand in my briefcase or vehicle.

Gerber self defense tools are very affordable and very effective.  Each of these items should have a place in your personal protection plan.  Once again Gerber is making stuff you can’t afford not to use.