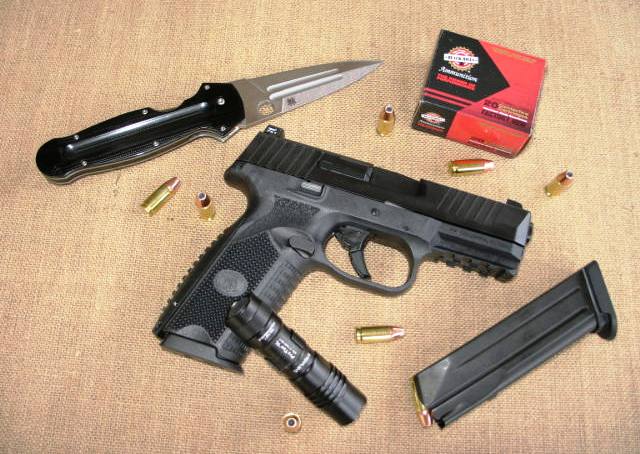 Ok Gunfighters, here is the down and dirty on the FN509 striker fired 9mm handgun. This gun was designed for the U.S. Army to replace the Beretta M9. It has since been offered to Law Enforcement as well as civilians. Upon shipment of this gun I took it to the range, pulled it out of the box, loaded the mags and fired a few hundred rounds through it before cleaning it. Not one malfunction. I shot a mix of ammo including Black Hills 115 grain full metal jacket and 124 grain hollow point.  This ammo shot and functioned perfectly.

My first impression of the gun was how comfortable it was to shoot. This is due in part by the interchangeable backstraps as well as a narrowing of the gun frame underneath the slide stop. In the narrowing portion of the frame FNH placed a non-skid type texture to enhance the grip of the shooter. The grip of the gun is also textured. The texturing on the grip was not too aggressive. I found the texturing to be comfortable and it allowed for an increased grip as well a thorough follow up shot.

The next thing I noticed about the gun were the steel sights. The standard model comes with fixed 3 dot luminescent sights and the Law Enforcement version comes with fixed three dot night sights (our test version). The front portion of the rear sights are blunt to aid in the ability to put the gun into battery with one hand by using a table, holster, boot, etc. Additionally, to assist with the cocking of the gun FN placed serrations on the front of the slide.

The trigger pull on the gun I test fired was 7lbs., 8 ozs., which is heavier than I would like but acceptable for a duty pistol. However, the trigger pull was crisp with a clean break, making it feel lighter than the gauge read. The trigger has a smooth surface and a short reset which enables the gun to be fired rapidly.  The gun has an overall weight of 26.9 ounces and sports a cold hammer-forged four inch barrel.  The barrel has a polished chamber and feed ramp and also a recessed crown.  This is a nice feature as the barrel protrudes slightly from the slide.

Additionally, the FN 509 has an ambidextrous slide stop lever and magazine release. This allows for an added ease to one handed shooting as well as making it better suited to both right and left-handed shooters. The magazines are equipped with a high viz orange follower and a polymer base. The FN 509 comes with two magazines with a 17 round capacity or a 10 round capacity depending on which state you are in.