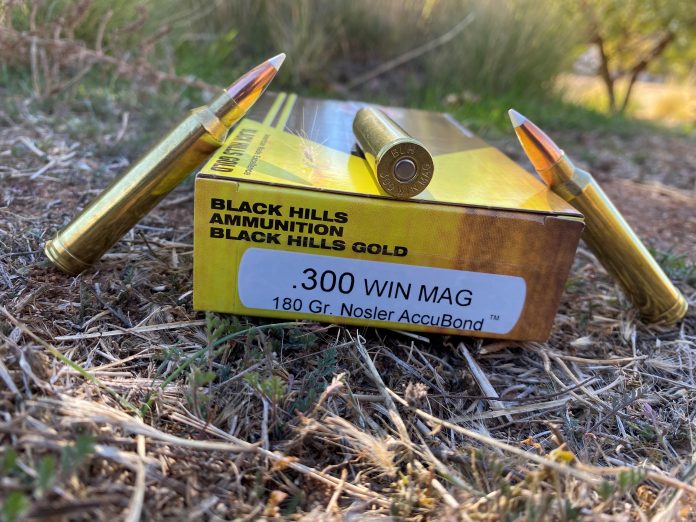 2020 hasn’t been the best year for most folks but I am blessed to say that myself, my family and most of my friends have all been healthy. As I sit here in my house and type this, California is locked down again. If you have been sick or have loved ones who are sick, my heart goes out for you.

Now that the mushy stuff is out of the way, I feel truly blessed that myself and some of the boys from the Guninpho crew were able to go to Walden, Colorado and hunt elk with Spur Outfitters on the Silver Spur Ranch.  I was also especially excited because I was given the opportunity to try out the Black Hills Gold 180Gr. AccuBond round in .300 Winchester Magnum. I am still shooting my Ruger .300 Win. Mag. in Go Wild Camo topped with a Leupold VX-5HD 3-15X44 CDS-ZL2 Matte-30mm with a wind-plex reticle. One of the many things that I love about the CDS system on Leupold optics is that you when you do switch ammo you can order a new CDS dial. I am a fan and love the CDS dial for ease of sighting in and saving ammo. Plus, it takes the guess work out of it. If you know the range of your target, simply turn the dial to range of your target and send it.

Written on the box of the Black Hills ammo it tells you that the velocity of the 180Gr. AccuBond is 2950 feet per second. I checked mine on a chronograph and got an average of 2984 FPS. That’s pretty damn close. I sent this information to Leupold, along with the average elevation I would be hunting, the average temperature, the sight height and what my zero distance would be.  Within a few weeks I had my new CDS dial. I sighted in my rifle with a 200 yard zero and I was off to the races.

I hunted the third season again this year hoping for a cooler winter but as 2020 would have it, it was another warm year with not much snow on the ground. The first 5 days of the hunt we did not see one elk. It wasn’t until the 6th day that I located a small herd at 1:30 PM on the top of a mountain approximately 1350 yards up hill. The herd was a mixture of mostly cows with one decent bull. I had an either sex tag and at this point I was not being picky and would take a cow or a bull. Guninpho’s Vince Sullivan and I needed to get on it before it got dark. We started our trek some ways away as to not spook the herd. As we approached the herd the wind was in our favor. The herd was on the north side of the mountain and we approached from the south. At one point the lead cow who was bedded down at the time, stood up and looked in my direction. She was just a little higher in elevation than I was. I had miss judged my location relative to where the elk were. I became a statute and did not move. I was behind some small aspens and had decent cover. I slowly dropped down to a low crawl and moved out of sight of her and continued toward the herd which was just over the next ridge. I gradually moved towards the top the ridge and I located the herd. The herd seemed to be on alert and were meandering about. I saw a handful of cows and one pretty good bull that was facing away from me looking towards the west (downhill). I opened up my bipod and got into a prone position. The bull was in between two nice size aspens but was clear of branches and other debris. The bull was canted slightly left and was approximately 250 yards from my position. If you are wondering if I ranged his distance, I did not. I didn’t have time and I knew it was 250 yards or within. I generally would have waited to make the shot but due to the elk already being spooked and the confidence I had in my rifle and optic I took the shot. I aimed just to the left of the rear quarter and punched a round though his left side behind the ribs up into chest cavity. The bull ran twenty yards and stopped broadside of me. I put one more in his lungs and he fell where he stood.  I stayed on the bull for a few minutes before approaching because I know elk are as tough as nails and will jump right back up. That wasn’t the case with this animal. That Black Hills Gold 180Gr. AccuBond absolutely floored him. I walked over to the elk and he was a beautiful 6×5. I can’t tell you how ecstatic I was. It was a beautiful stalk and ended with an amazing animal. That’s what good hunts are all about. A great story with a happy ending.

So, let me tell you about the damage the AccuBond round did. After skinning and gutting the elk I found my bullet up in the elk’s neck. It went behind the ribs destroying everything in its path eventually coming to rest in the neck muscles. When that elk stopped after his twenty-yard dash, he was dead on his feet. He just didn’t know it. The second round was a pass through both lungs.

The weight of the bullet I recovered out of the elk’s neck was 114.248 grains. That is over 60% bullet weight retention of the original 180 grains. Average Nosler AccuBond bullet weight retention is 60-70% so this is consistent with their claims. There are many factors that can contribute to bullet weight retention such as distance and what material your bullet passes through (skin/muscle/bone). My recommendation would be to choose the right reputable bullet for the game that you are hunting. You can’t go wrong with the Black Hills Gold 180Gr. Nosler AccuBond for elk hunting. If you have any questions at all feel free to send me an email. Take care and God Bless!