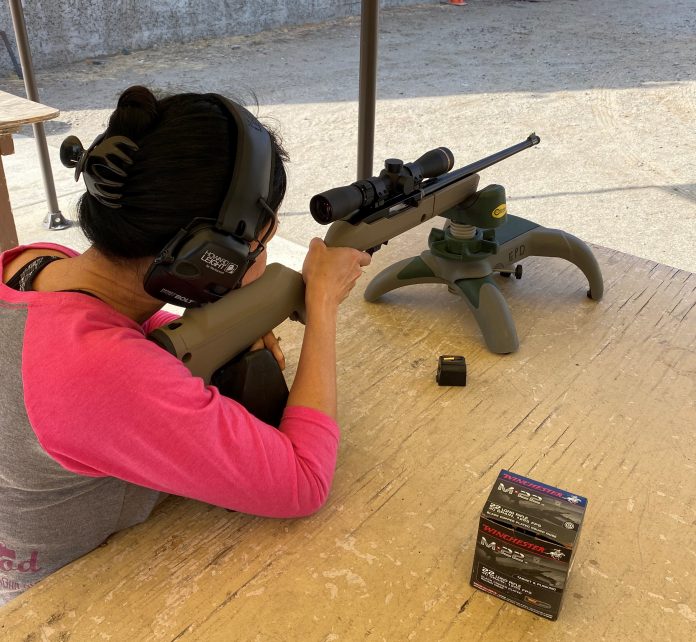 The Ruger 10/22 has been around for decades. My two older brothers gave me my first one as a 16th birthday gift and from that moment on I was hooked. I have owned many of them and at any one time I usually have at least half a dozen in my gun safe. The 10/22 Takedown has been around for a few years now but its popularity only continues to grown. Perhaps that’s because Ruger keeps coming out with cool new models. One of the latest is a compact version with the new Magpul X-22 Backpacker stock.

The Takedown incorporates Ruger’s legendary semi-automatic action along with an upgraded extended magazine release. This really helps with fast mag changes of the flush mounted 10 round rotary magazine. The Takedown features a unique design which allows the barrel and forend to be quickly removed from the receiver. It can just as easily and quickly be reassembled in a secure manner which returns the gun to zero. When disassembled, the two parts can be stored in a compact package allowing for easy transport. The Magpul X-22 Backpacker stock takes this to the next level. Made of an advanced polymer, it boasts an ergonomic handguard and QD sling mounting points. The barrel assembly clips to the receiver keeping the two pieces secure and making them even easier to store and carry. The Magpul stock is available in four colors: Black, Flat Dark Earth, Stealth Gray and Olive Drab Green. Ruger also sells the Takedown in numerous other stock styles.

Some other cool features of this Takedown model include storage areas in the butt stock. There is a small compartment in the grip and then a large hinged compartment in the top of the stock. When you open this you find it is capable of holding 3 Ruger 10 round magazines. What’s more, Ruger includes 4 BX-1 magazines with this gun so you are ready to go right out of the box! I have also found you can store small boxes of ammo in the stock for even greater ammo capacity.

This rifle came with a cold hammer-forged threaded barrel capable of accepting a suppressor. On the top of the barrel is a set of very nice adjustable fiber optic sights. If you are a scope guy like me, Ruger includes a Weaver style scope base with each rifle. I mounted a Leupold VX-Freedom 2-7x33mm scope on mine. This is a great scope for a .22 rifle but especially for the Takedown. The VX-Freedon line is an affordable yet high quality optic. Its small size and low profile helps when storing the gun and its power range gives you everything you need for any challenge.

I zeroed the rifle at 50 yards with the Leupold optic and found it shot like any other Ruger 10/22 with a standard barrel. It had good consistent accuracy and gobbled up any ammo I fed it. Obviously some ammo shoots more accurately than others but I tend to shoot my .22s at small game so I stick to hollow point type ammo when I’m serious about accuracy. I found the gun shoots CCI Mini-Mag and Browning BPR hollow point loads very well.

When unpacking your new Ruger Takedown, pay attention and read the manual. There is a special procedure for fitting and tightening the barrel the first time. Once you do this, the gun will return to and hold zero. If you don’t do this, you will wonder why the gun doesn’t shoot so good. More than one shooter (usually us guys!) has called in to Ruger with a complaint about accuracy only to be politely told to read the manual!

The Ruger 10/22 is arguably the most popular .22 of all time and definitely the most versatile. A click on the Ruger website will show you about 50 different models of 10/22s! If you can’t find one you like then you are probably too hard to please.