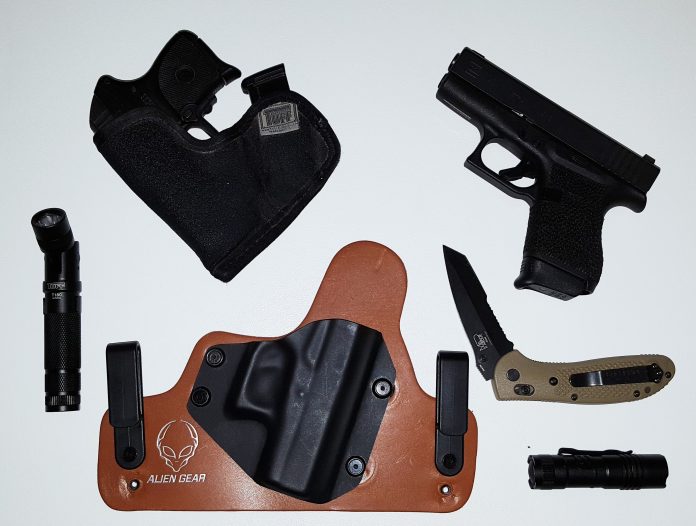 You are a sheepdog, protecting the flocks from the wolves. But now you are a little grey around the muzzle, and there are leaner and meaner sheepdogs out there to protect the flock. It is time to hang up the gun belt and call it a career. But you have more things to think about other than how far the pension will go, where to take the spouse on your retirement trips, etc.

One question you will face now that you have pulled the pin is, whether or not to continue to carry a gun. For years, it was not really an option for me as I was a working police officer. Whether it be in Patrol or later in plainclothes assignments, I had to carry a gun while on duty. That was really not a problem while in uniform. But the vast majority of my time on the job was in a non-uniformed assignment. That meant I had to become rather adept at carrying a firearm concealed. And by my choice, even before the plainclothes assignments, I chose to carry a weapon off-duty too. So I have had a bit of practice at choosing a concealable firearm, carry rig, and appropriate clothing.

But now I am retired and the game plan is so much different.

Before I go into all the details, one must ask some questions:

When still on the job, carrying off-duty came down to, “Do I want to take action if needed?” or “Do I need to protect myself from someone?” My answer to these questions was always, HELL YES! I only had a couple of situations off-duty where I needed to take action and I was glad I had a weapon with me. And fortunately in those few cases, firing the weapon was not necessary. My bigger concern, and still my concern, is that I put a lot of folks in jail, for long periods of time, when on the job. Those folks probably don’t like me much. If I encountered them now, I would still like to be able to protect myself. So to use the cliché, “Better to have and not need, than need and not have.” So I have decided to carry whenever I can. The decision is still yours.

But if you still want to carry, then next question is, are you still mentally and physically able to carry a gun? Damn it, we all get older each day, or we have died. And as we get older, things just don’t work like they did when we were younger. We have a bank of experience in that old cranium, but sometimes, it takes a little more time to dislodge it and put it to use. I am only eighteen months into my retirement, so my head is still on a swivel and I am still operating on alert most times. But as I get farther away from the job, the sense of awareness will also dull. And I don’t know about you, almost everything physically has slowed down or nearly stopped working (Damn it again!). The eyesight is worse and probably needing correction. So can I still see those tiny three dot sights or do I need something bigger and brighter? The hands and arms may not be as strong. All these things come in play with carrying a gun too. Are you still able to handle that cannon you carried when you were a young strapping patrol officer? Is the recoil of the .357 magnum going to be a problem for you now? Are you able to make the decisions quickly that you may have to make?

Next question is, do I have the right stuff? Not mentally or physically, but equipment wise. That Sig 226 you carried all through your career is just a bit big now to hide under the Hawaiian shirt and in the waistband of the cargo shorts. Time to consider the smaller guns that are out there. Maybe something you were familiar with in Patrol (you know, like that back up gun I am sure you were carrying). The good thing with time passing, is that all kinds of new options are out there for concealed carry, from lightweight revolvers (I have a Smith and Wesson 340PD .357 revolver that is so light it really feels like a toy in my hands) to single stack 9mm and 380 pistols. And not just the gun needs to be considered. How are you going to carry it? Just stuck in the waistband is not going to do. But then again, you have some pretty modern options that have recently come out (like very comfortable inside the waistband holsters and pocket holsters). The good thing is you are retired. You no longer have to be a fashion statement every day. Winter time is no problem as bulky clothes can even hide that old 226. But now in the summer, loose clothes are it and CCW becomes even harder.

When you were on the job, you had to qualify with your sidearm, hopefully more than once a year. And if you were smart, you practiced with your tools of the trade as often as you could to remain proficient (don’t get me started with you slackers who never showed up at the range on Open Range Days where they gave you free ammo and let you shoot on company time!). But now that you are retired, and you have decided to continue to carry, you still need to practice to remain proficient with that deadly tool you want to have with you. Remember, you are slowing down mentally and physically, so practice is a must, just so you can see how capable you still are. Hopefully your former agency will still allow you range time. If not, think of finding a range near you and maybe a range membership. And if you plan on carrying, be familiar with your former agencies policies regarding retirees and CCW, the laws in your state, and the laws pertaining to you carrying out of state. And being proficient is not just going to the range. You need to get off the recliner and exercise to keep things working well for as long as you can.

So if the answers are yes to “do I have a need?”, “am I still able?”, “do I have the right equipment?”, and “can I remain proficient?”, then go forth and carry. But once even one of these questions is answered “NO” it is time to think about hanging up the old shooting iron. Next to losing your driver license for good, this will probably be one of the hardest things you do as an old copper. I don’t know how I will handle it, but I know the day will come. It will be a sad day.

So I am still carrying as an “old retired dude”. The answers to the questions are still yes in my book. What I carry is not the know all or end all. It is like cars, everyone has a different opinion as to what is best and what they like. In my case, I have three most frequently carried handguns. My favorite, and most often carried, is a Glock model 43 single stack 9mm pistol. I usually carry it in an inside the waistband holster (like one by Alien Gear) or a Versacarry Zero Bulk holster for appendix carry. I find these most comfortable. I spent many years on surveillances in a car and got used to having my gun up front where I didn’t have to reach to the side or back to get the gun out if someone walked up on me. I carry an extra magazine just because eight rounds just might not be enough (in a DFW Holsters IWB pouch). I always carry a pocket knife; usually a Benchmade folder. And I always have my retired credentials in my pocket. I hate using fanny packs and pocket holsters, but if the need arises due to clothing considerations, then I change out to either my S&W 340PD or my S&W Bodyguard 380 in a small fanny pack or pocket holster. Granted, none of these weapons would I want to take down a bank robber with heavy firepower, but any of these three will probably be enough to save me and mine should something bad happen. Remember, no matter how big or powerful you or your weapon is, there will always be the chance that you will encounter something bigger and badder that you! Also a good light is nice to have so I usually carry a Streamlight ProTac 1L flashlight.

Now my friend JD has a bit of a different take on his everyday carry. Since he is always in shorts and a t-shirt in his shop (poor dude still has to work) he goes with a smaller carry package. His choice is a Ruger LCP .380 with laser in a Tuff Products pocket holster which also carries a spare magazine. And of course, if he needs a light, he has his handy Tuff Products flashlight.

When you were on the job you were always wanting to be able to go home at the end of the day. You wanted to protect you and yours from evil things. Not everything changes with retirement. You were, and always will be, a sheepdog at heart. But now it is time to relax and enjoy life, pester the youngsters with stories about how great you were (Did I tell you about the time…..). But always, always…..BE SAFE OUT THERE!