For my entire law enforcement career, I always carried a back-up gun (or BUG) on duty, and frequently even off duty.  Usually my BUG was something small like a J-framed revolver or my Walther PPK.  Toward the end of my career the BUG became more modern and was either a S&W 340PD or a S&W 380 Bodyguard.  But now that I am retired, these two guns (or a Glock 43) became my primary carry gun.  Hey after all, I was no longer planning on law enforcement confrontations.  Now I am only concerned (mostly) with saving my posterior.  But carrying a BUG is still in the cards; granted, it is not something I would consider as a primary weapon, but it is still better than nothing.  And besides, it is just darned cute!

I am talking about my North American Arms (NAA) 22lr mini-revolver.  Five shots of 22 in the smallest handgun I have ever seen.  It is smaller than the palm of my hand and can be easily carried in my jeans watch pocket.  And I have a few other clever ways to carry it.  This little BUG is well made, solid, and plain fun to shoot.  It is accurate within a few yards, but I would not push my luck beyond about five yards with it.  Now young man (who is as big of a gun enthusiast as I am) poo-pooed my little friend saying he thought it was unsafe as it had no trigger guard and the hammer was resting on a live round.  Oh Grasshopper, that is not so.  NAA did a fine job of making sure this BUG was able to be carried safely.  See, the hammer rests in a groove in the cylinder, between rounds.  Since it is a single action revolver, you have to cock the hammer before firing.  So really the only way the gun will shoot, if properly set up, is to cock the hammer and then press the tiny trigger.

One of the alternate ways I like to carry mine is in an old Case Logic camera case.  Not only does it fit in the case, but I also have two Tuff Products ten round speed strips in the case; one loaded with 22lr Stingers and the other with CCI 22lr “snake shot”.  When hanging on my belt, it just looks like I have a camera case on my belt. 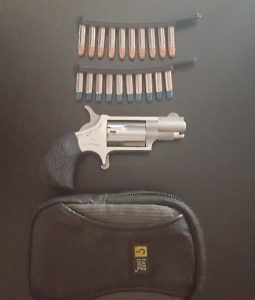 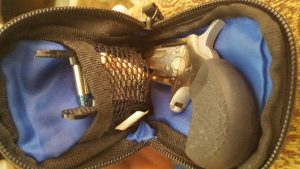 NAA offers a folding grip with which you can replace the little birds head grip.  The revolver folds into the grip and can be carried in your pocket; looking like a folding knife in outward appearance.  Instead, I chose to get a black rubber sleeve for mine (also available from NAA for about $18).  And if you are interested, seems most gun shops are selling these little gems at just a bit over $225.

Since I got mine a year ago, a few of my friends have decided they needed one too.  I mean, it is in the pocket and off you go, with little chance of printing or accidentally being exposed.  No, it is not a primary carry gun.  But it is still better than having nothing and it makes a get BUG.

NEXBELT “The Belt with No Holes”