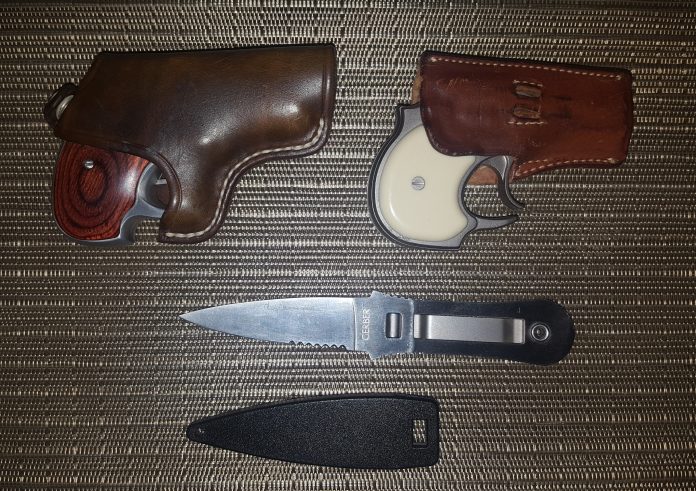 Quite often, hard work pays off.  Sometimes in ways that are unexpected.  Today my wife and I tackled our storage area next to our garage.  In 1999 we moved in and we put some boxes in the storage cabinets.  Things got piled up in front of the cabinets and 19 years later, these boxes had been forgotten.  But today, we decided that this mess needed to be cleaned up and stuff needed to go.

So I opened a box and I found some stuff that I truly had forgotten I had.  The first thing out of the box was a citation book with a calendar dated 1983.  No cites in it; nothing but the calendar.  But along with it was the Judge holsters for my old S&W Model 28 (which was stolen in a residential burglary in 1986) and for my old S&W 686 that I carried as a Reserve Deputy with the San Diego County Sheriff’s Department.  Both of those guns were long gone and the holsters were nice in a nostalgia way, but otherwise useless.

But then I found some true treasures.  Well, at least true treasures to me.  First out of the box was my old boot knife.  It is a Gerber “Blackie Collins” single edged dagger in a plastic sheath.  Other than a little gunk in one spot, it is as pristine as it was when I bought it.

The next treasure out of the box was a clip holster for my Hi Standard 22 Magnum derringer.  I still have the gun (obviously from the photo) but I truly forgot that I had a holster for it.  Originally, the holster, made by Safariland, had a place on the outside of the holster for two extra rounds.  Unfortunately, the loops for the extra rounds had rotted away.  But on the good side, the holster itself is still viable and very usable.  These holsters are pretty rare.  I have been trying to find one for years.  I thought mine had disappeared along with my hair and youth.  Not so.  Score one for the home team.

And finally, the other gem.  I found a holster made for my American Derringer DA38.  I knew I had one back in the day when I bought the gun.  But to be honest, I had no idea what happened to it.  As far as I know, this is the only holster ever made for this fairly rare derringer.  And other than the leather being a bit dry, it is in perfect condition.  So score another point for me.

So all that hard work today not only cleared out a lot of junk, trash, and useless items, but it also revealed three things that I consider treasures.  The wife says next time, we are clearing out the rafters in the garage.  There are boxes up there that are almost as old.  Time for a treasure hunt!